Your cart is currently empty.

It was Nov. 2013 when our friend Janna came home for a vacation from USA. After a short stay at Manila to meet up with her college friends, we've heard she's on her way to our hometown. Upon arrival, of course we visited her for a long chat and alcohol binge (my favorite game) and this is where we learned about their plan to reach the top. Originally, there were only 5 of them, Janna, her younger sister Jessica (who's also on vacation from KSA), their cousin Giselle, and her 2 friends(late meet up). Two of us were invited but Thrice wasn't able to go and I was with doubt at first but hey it's all expenses paid anyway so why not.

We left the next day before noon and arrived at manila before 7pm. Just a quick rest and a little time to pack stuffs we need for the climb and we're off to cubao to catch the bus headed to bagiuo. I ride a different bus since they booked their trip days earlier and that bus was full. My bus ride was a bit longer due to stops but it only came 20 minutes short of their arrival time and Giselle's friends already joined them. It didn't take long before our service arrived, and once again we're on the road. I think it's about 3 hr SUV ride with a 5 min halfway stop to get to DENR office where briefing will take place. In our case, it took a little longer because we had a chat with other mountaineers at the stop and we all agreed to make our teams one since there are 7 of them and only 6 of us. From DENR Office, we transferred to a jeepney the guys rented for another 1 hr ride to the Ranger Station. Anyway, I must say that the driver was really bad ass man. I never ride a drifting jeepney before, it was very thrilling and dangerous ride due to muddy road and deadly cliff drop.

Our journey on foot began:

Ranger Station is where you'll arrange for tour guide, porter and vote for a team leader. I think they assign 1 guide for every 10 person. They assigned 2 guides because our group has 13 members (we joined as one team thinking we'll save money by having only one guide.. LOL). There's a rumor of a previous hiker catching hypothermia but nobody confirmed if it's true (later Jan 2014 it was mentioned at TV Patrol news having one casualty in month of November). Everything's settled so we gathered for a prayer then begin the hike, it was approximately 1 and half hours (depends on your pace) on foot with at least 20 min knee busting climb before reaching Camp 1 (perfect for resting after the steep climb) and less than 2 hours to get to Camp 2 (camping grounds). By the way, professional mountaineers set up their tents near the summit. Our team mates manage to set their tents up before it gets dark but unfortunately for us, we aren't geared properly for the weather so they didn't allow us to set tent in open grounds. It's no use arguing with experienced hikers so we heed their call and later on found out the benefit. We learned how unarmed we are as we begin to hear their mountaineering stories and seeing how their gears work and the likes of it. I guess we all agreed that night, it was a pretty ambitious climb for first timers to hike the 2nd/3rd (still debated) highest mountain in the country being unprepared. At least we're proud that they give it to us, we have the guts! (is it really guts or death wish?)LOL. We continue chatting over dinner and after that, what else?, the best way to fight the cold is liquor so we brought out all the alcohol drink we packed and push on getting to know each others lives. It was nearly 1am when the last 3 man standing (including me) called it a night, it was 9 degrees if I remember right. The plan was to get up 5am and hike to the summit to witness the sunrise but sadly it was dropped due to zero visibility and rain. Everyone was up at first light then coffee and breakfast was prepared and served so that we may resume the hike at 8am. As breakfast was done, everyone prepared themselves and suit up to make ourselves wet proof; you know cold weather, rain and fog. Well for me, I'm wearing only cargo shorts so I had to improvise and strap my legs with a trash bag to prevent soaking up my legs then eventually both socks and shoes. The hike only took less than an hour with minimal climbing effort, and tadaa… at last we are on the top of the 2nd or 3rd (whatever) highest mountain in the country of the Philippines. The peak is said to be 2,922 mts but I didn’t ask my team mates reading in his altimeter. Surely reaching the summit was a wonderful feeling of accomplishment and satisfaction. Thanks to the guys that made this adventure a success, I don’t think we'll made it that far if we haven’t met them. Well I wasn’t disappointed but I just hope we saw the sunrise, they say it was a beautiful scene. Good part is, I was literally standing in the clouds (It’s impossible to stand on clouds right?) and of course, touching the sky. Nevertheless, it’s great considering the previous team never made it to the summit; some didn’t even reach Camp 2 because of the bad weather.

Credits to Bong Bajo for the video, I just borrowed it. "Kudos!" pra sa iyo!! 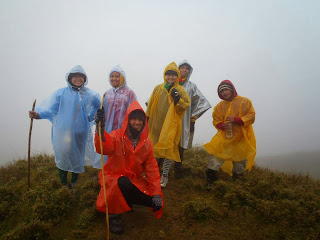 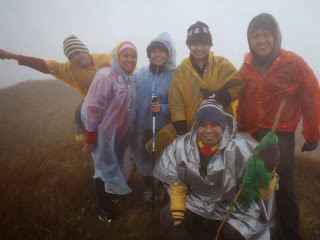 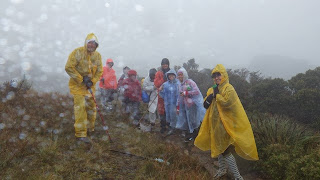 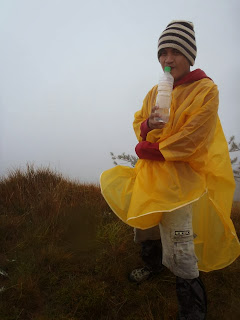 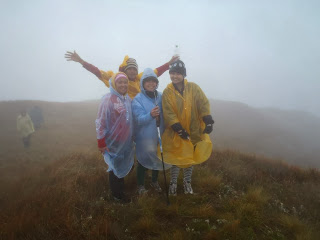 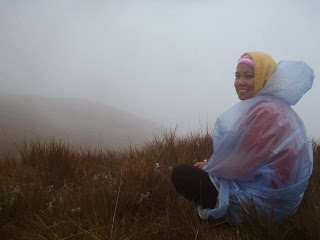 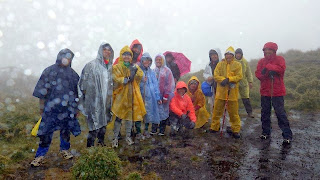 A quote was mentioned to us by the DENR officer that applies as a rule to Mt. Pulag, here it is:

So we packed everything even trash and brought it with us all the way down. Our descend phase is kind of fast and quiet, for sure everyone is eager to reach the Ranger Station to rest. I didn’t even bother the pain in my shoulder because of my backpacks weight. That's about it!, we re-trace our trip back to bagiuo and Janna offered dinner then we said our goodbyes to the good heart fellows who we owe this ones success. And lastly pictures. 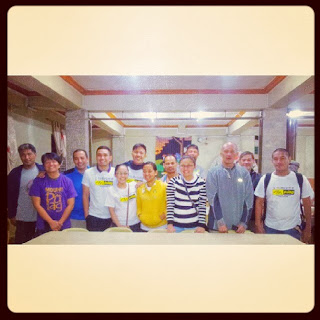 Thank you Janna, Jessica, and Giselle for a great experience!!

Here are some tips to survive Mt. Pulag:

- Jacket, waterproof just in case it rains and a thick one to fight the cold.
- Shirts, bring lots if it's humid.
- Wet proof pants, Leggings and/or jogging pants
- Trekking shoes
- Bonnet
- Gloves
- Socks, thick and long.

You might want to double or even triple that! Bring extras. Our clothes wasn’t enough to fight the cold, it might drop below 0, Our last check before sleeping was 9 degrees.

- First aid kit
- Toiletries (soap, shampoo, toothbrush),
- Toilet paper or wet ones, there are designated “Toilet Areas” at the camping grounds.
- Flashlight and Batteries, it's advisable to bring your own.
- Spoon and fork,
- Drinking cup, if you’ll be drinking hot drinks or liquor. hehe
- Raincoat
- Slippers
- Sleeping Bag, bring your own. In my case, the tour guide offered me his. haha
- Water bottle container, it can be filled up with spring water along the trail.
- liquor and cigarettes, I don't smoke so I only need lots of alcohol. lol

Avoid casualty or being left behind, pack right to fully enjoy the hike!.

"Prevention is better than cure"

Get the best value for your hard earned money.

We ship to over 200 countries & regions.

Our Buyer Protection covers your purchase from click to delivery.